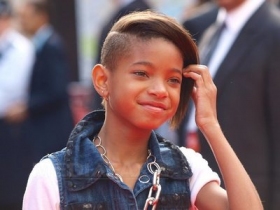 Following the success of her debut single Whip My Hair, Willow Smith moves on to preparing her first ever studio album. Details about the effort might remain under wraps, but an audio snippet claimed to be her new song has come out, giving a clue on what to expect from this little girl. Like Whip My Hair, this new one features upbeat sound with catchy hook. And you may take a listen to song snipped called Rockstar below :

The album is expected to be released next year. One of the people who helps Willow is singer/songwriter Jessie J. Smith most recently announced that she would be touring with Justin Bieber on the European leg of his My World tour, which will begin in March of next year.

Whip My Hair - Behind the scenes in London :