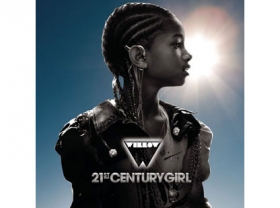 Willow Smith premiered the music video for her second single 21st Century Girl. The 10-year-old Roc Nation artist is raised from under the ground and pulls an entire city out of the desert sand. She parades around the city with a bunch of friends, runs with the wolves and breaks into a spontaneous outburst of dancing on the streets.

21st Century Girl will be listed in her upcoming first studio album. "It's about girls who can be themselves. They're walking toward their goal. They're thriving to be the best, 'cause you know that you can do it," she said in a behind-the-scene clip.

The music video is directed by Rich Lee, and inspired by "vintage Versace, borrowing shapes from Marie Antoinette with very current pops of color." Her stylist Brea Stinson told Rap-Up, "The overall video was inspired by everything - the movie Blade Runner to Japanese street culture. 21st century girls aren't afraid to take risks and live their dreams, and we did our best to showcase that in the wardrobe."

Willow Smith is currently touring across the globe with fellow young singer Justin Bieber for international leg of his My World tour. The traveling show is expected to be followed by the release of her not-yet-titled album.