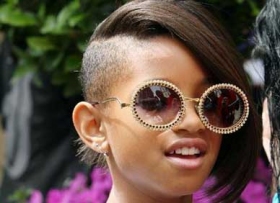 The 9-year-old singer, who is a fan of Rihanna and has her fashion style inspired by the Barbadian songstress, apparently is also influenced by the "Umbrella" hitmaker in this fresh material. Containing fun vibe, the song has prospect to bust the chart. It already got praised by Solange Knowles who wrote on Twitter, "Willow Smith make me wanna whip some haiiirrr in this house. Ummm kill em girl. Kill em!"

In her debut song, Whip My Hair, she sounds a lot like Rihanna and certainly does not sound like a 9 year old. With no real competition in the tween music market, Willow could easily find a home in the competitive music industry. As the daughter of Will Smith and Jada Pinkett, she has enough connections in the Scientology world to have a head start in the industry.

This song is catchy, and does not feature any inappropriate lyrics, but does have a modern sound that many will be able to connect with. It will be interesting to see what kind of opportunities the song opens for young Willow Smith.