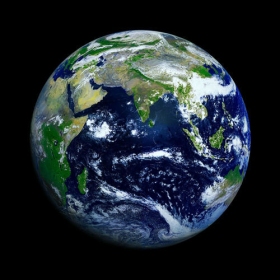 James Cameron - M. Night Shyamalan. Two different directors that made movies with a similar message: Avatar and After Earth. All we're doing is trying to trace where exactly Will Smith's 15 year old daughter got her interest for sci-fi and fantasy.

Some compare Willow Smith's new song 'Rta to Lana del Ray's musical style. Of course both have a fair amount of that 'experimental' in their music, but we think that a fine line needs to be drawn between them: you can say that they seem alike from afar, but that would be missing the details. If you search their styles with a magnifying glass you'll find that they're fairly different.

Willow brings in a whole mythological baggage into her music. She invokes god Mahadeva, popularly known among Americans as Shiva: "I am a goddess with three eyes and six arms". She's alluding to the fact that serenity and complete objectiveness is the key to spiritual uplifting. Shiva's third eye can destroy the entire of humanity, but it is always closed: that is the eye that sees the world as a whole. The other eyes depict the inner and immediate world.
This conclusion we've drawn from the line that follows that which refers to the hindu god: "I don't despise this, this evil, these people". Sounds immediately come all at once, like a storm of distinct voices, "so many solos play". They're "vibrating, coiling your neck". This could be Pythagoras' musica universalis. The universe emits a chime that we cannot hear, as we cannot hear our heartbeats. We're born into a world that's musical. If we would have seen the dawn of our days before the universe sung its first melody, then we could have heard it. Otherwise, we're highly familiar with it, and we cannot perceive it. It's like being played a recording of our voice, and all of a sudden, we cannot recognize it as our own. Many such cultural interventions are gathered up in one four minute song, leading us to this one pernicious question:

A 15 year old who enjoys a good gag over her listeners? That wouldn't be a first. I don't know, there's something about the arabesque of the song, the height its experimental insight has reached, the shift from brand clothes, dyed hair, street dancing and not giving a damn to this sublime, inward oriented guru is a little too much for me. And the interest for a highly artificial language as Na'vi?! What's up with that? I mean, people like J.R.R.Tolkien, who had a career in linguistics, are interested in such abstract fields, like creole languages. He invented Quenya, Entish, Black Speech, Khuzdul, and a couple other languages for his LOTR book series. Of course, Willow only uses words that can easily be found with a quick google search, but still. Who else has bothered to name his song with a word from a language invented solely for the movie 'Avatar'?! And another thing strikes me as odd: her interest in Na'vi is superficial. The inhabitants of Pandora didn't speak in the American linear model, Subject => Predicate => Object-Direct => Object-Indirect. Or in our case, because Willow uses Na'Vi as an imperative in the last four seconds of the song, Predicate => Object-Indirect => Object-Direct => Subject. The words virä atan tsmuk ulte tsmukan ftu 'Rrta, translated as 'Spread light sisters and brothers of Earth', though a great message, would look somehow more scrambled when put down on paper.

Anyway, London is seen as a mount Parnassus, a refuge for those that use their imagination for more than a mere money-dream. Again, the song, with all this arabesque, cannot help but inoculate that suspicious serum into our bodies. Though the outcome is altogether a good one, spiritual, uplifting, the one that originates the saving message lacks credibility. Has Willow Smith changed from her Nicki Minaj collab days? Is this the new Willow Smith, the one emancipated from her influential father's grasp? Guess we'll have to wait for another song, to see if it will follow the same pattern. Or a video, because that could actually speak 1000 more words than this news article that is mostly based on assumptions. We loved the song, we hope you love it too. We are 'Rta, meaning, we are the world. We need a language that's universal, like Na-Vi, we need something more than words to understand each other's feelings, emotions, thoughts and actions. But does this Mecca need to be pointed out by a 15 year old? Let us know!