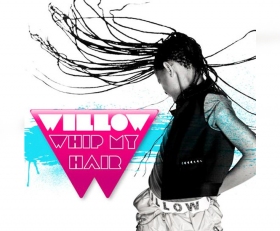 Willow Smith brings the fun to school in a music video for her debut single "Whip My Hair". The 9-year-old singer walks into a plain room full of people dressing in the same white outfit. The music is played and she shakes her long braided hair and sprays paint all over the place in the process.

"Whip My Hair" is confirmed to be listed in Willow's upcoming first studio album as a lead single. The music video is directed by Ray Kay and features some costume changes which show off her killer outfits. "Sometimes I put my own stuff in it. I mix up the outfits too," she said of her style in a radio interview. "My mom puts together outfits and I can pick which one I want to wear."