The Whitlams formed in late 1992 in Newtown, Australia. As a three piece with no drummer, Tim Freedman, Stevie Plunder and Andy Lewis developed their songs acoustically on Saturday afternoons at the Sandringham Hotel in King Street.
So followed the usual formative months of beer, bonding and bad shows. In early 1993 they discovered that with their gear, they could all fit into a Kingswood station wagon. Taking turns lying on the piano in the back, they headed off every six weeks to Byron Bay and Brisbane and became a real band. August 1993 saw the release of "Introducing The Whitlams". Its 10 tracks were a mixture of 3 produced tracks, 5 live takes and 2 songs from their first demo. Its jaunty acoustic spirit worked well with radio, and live they started to be known for their rather comic abuse of each other, which sat strangely with sweet 3-part harmonies one minute later. Stevie was usually drunk in those days and no-one could work out what Tim was on.

Andy didn't speak. Piano and double bass were not the hip thing in the inner-city, but the rough edge and energy with which they utilised them got The Whitlams good crowds from the start. Over 1993 and 1994 they played over 300 shows, most with drummer Stu Eadie. This line-up was remarkable for its brutal dynamics and infectious snappy vigour. For six months they toured and lived in a pink greyhound bus, later made famous in the movie " Priscilla Queen of the Desert". It was a mad-house on wheels.
Late 1994 they went into the studio with fabulous Rob Taylor producing again and had a month to create a full-length document. This became "Undeniably The Whitlams". It was more richly textured and stylistically varied than its predecessor, retaining the humour and developing their artfully sensitive side. Just after the album was released Andy got married and moved to Melbourne. He was replaced by an friend of Tim's, Michael Vidale, whose favourite food is fetta cheese with a bit of olive oil, cut thin and eaten on a knife.

The band toured the album nationally in November 1995 and its profile over summer increased enormously as the single "I Make Hamburgers" gained broad community and commercial airplay across the country. They were about to take advantage of this upturn in fortunes when Stevie Plunder was found dead at the bottom of a cliff on Australia Day, 1996.

After a four month break Tim decided to keep the band going. He experimented with line-ups over a couple of tours to Melbourne and Brisbane, and 12 months after that recorded an album, Eternal Nightcap, which went on to sell over 200,000 units.
In 1998 The Whitlams were nominated for 8 ARIA awards:

...and won 3 ARIAs:
BEST GROUP
SONG OF THE YEAR ( for No Aphrodisiac)
BEST INDEPENDENT RELEASE (for Eternal Nightcap) 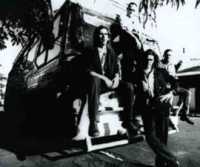