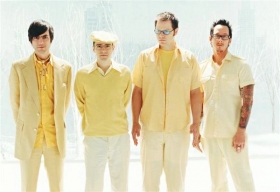 A brand new single from Weezer has been unveiled entitled "Memories", it was debuted on SoCal's 98.7 FM and introduced by frontman Rivers Cuomo after the band performed at the US Open Surf Championships over the weekend.

"Memories" is the first single from their upcoming indie studio album "Hurley" which is going to be released in United States on September 14 via their new home Epitaph Records. The band's camp wrote on their official site, "This is the 3rd new Weezer album in 3 years, an unprecidented feat for the weez thats reminiscent of the olden days in the '60s when bands released new stuff on a tight schedule."

Other new tracks from the fall release include "Ruling Me" and "Hang On". There's also "Smart Girls" which is an ode to all the girls that are hitting on Cuomo on Twitter.

Take a listen to Weezer - Memories new song below: