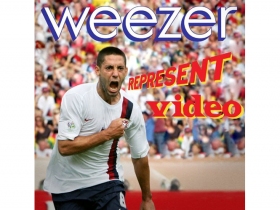 Check out the latest World-Cup video! This time is the one for U.S.A. soccer team!

Weezer's World Cup-inspired song "Represent" has got a music video. The clip mostly highlights the United States Soccer team when they are on the game and the supporters who are cheering from the side of the field. A glimpse of Rivers Cuomo when he crafts the track in studio and performs with the band are also included.

The video arrived just before the United States soccer team faced off Algeria for a critical match in which whoever wins will advance to the next round. The showdown was later ended with the U.S. winning the game through Landon Donovan who scored the goal after 90 scoreless minutes.

"This time around, I was just feeling super optimistic and kind of badass after our performance in the Confederations Cup last year," Rivers told MTV about recording a soccer song for the second time. "And especially around this player [Clint] Dempsey, who seems to have this badass attitude and ability to step up and put the ball in the back of the net, even when we're playing against the giants. So I wrote a song, which hopefully captures some of that confidence and swagger in the face of pretty daunting odds."