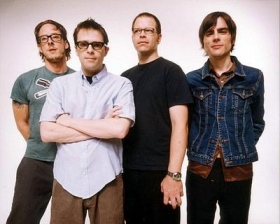 Weezer filmed the music video for their new single "Memories". Despite falling and maybe getting some bruises resulted from their dangerous stunts with skateboard and bike, everybody are in good spirits, singing along to the song's chorus.

"I had been married for a few months and had been in school for the semester before that, and basically I had been away from the band and the rock world for a while," Rivers Cuomo told MTV. "I was really missing it, and just sitting there alone in my room missing the fans and missing my band, so 'Memories' is about getting back in there."

Weezer include "Memories" in Hurley which is slated for September 14 U.S. release. "This is the 3rd new Weezer album in 3 years, an unprecidented feat for the weez thats reminiscent of the olden days in the '60s when bands released new stuff on a tight schedule," they said.