Trystero is the name of the oldest conspiracy in the world

which started off in the early XIII century and has supposedly

survived until our times. In modern times the Trystero couriers

of the organization was undermining of all official power in all

its guises. Trystero is reported to have been active in America

for the past 200 years, but no definite evidence has ever been found.

"An Act Of Darkness"

In the so-called "Enochion" system of Magick, the 10th Ethyr

where the Psychonaut must meet and battle CHRONZON,

a deamon-god to some, yet an illusory non-entity to others.

This devil of Dispersion is the guardian of the Abyss,

the Dweller of the Threshold, and the Gateitself,

And was not Man created from the blood of Kingu, commander

of the hordes of the Ancient Ones? Does not Man possess

in his spirit the seed of rebellion against the Elder Gods?

And the blood of Man is the Spirit of vengeance.

And this is the Covenant.

(Of the Forgotten Generations of Man - taken from "The Magan Text")

The nephilim (Hebrew for 'giants' or 'the Fallen Ones')

of the ancient Jewish legends are just distraction of what

cults of Sumer and other old civilisations refer to - a race

of partly divine, partly organic, so to speak, creatures from

the Outside, be it other worlds or another planet. Almost all

prime great cultures teach that these beings provided the mankind

with the godly spark of wisdom, both mundane (like agriculture)

and mystical and that they and people were severely punished

for that Promethe an rebellion by forces trying to hold the

mankind in the state of animal-like state of blissful ignorance.

Yet the seed was sown for us to flourish.

To ancient Egyptians no star, except for the Sun,

in his "Sirius Mystery" tells us much about spiritual and

mundane influences of the very complex symbolism of this

starry emblem, tracing its cult to the pre-Egyptian sources.

Sothis was a star of many gods, standing for Isis, Osiris,

(the head of Typhonian O.T.O.), name its influence as very

important and identify it with the curre nt of the present age,

Eos of Horus, Crowned and Conquering Child, yet with the Sethian

on this great enigma may be found in a fascinating

shall be. From the dark stars they came before the Man was born,

unseen and loathsome they descended to primal Earth. Beyond

the gate dwell now the Old Ones, not in the spaces known unto Man,

but in their angles betwixt them. Outside Earth's plane They linger

and ever await the time of their return, for Earth has known Them

and shall know Them in time yet to come. After day cometh night,

Man's day shall pass, and They shall rule where They once ruled.

"Vision And The Voice"

Another Enochian theme is inspired by A.Crowley's book

bearing the same title, where the Beast recorded what he saw

and heard during the desert operations in 1909. The visions

consitute almost a complete map of the Astral, including the most

unreachable Regions of the Spiritual. Each vision literally sparks

with intensity of expression that is powerfully impressive even

to the uninitiated and profane. The influence of "Vision and the Voice"

can be clearly seen in all occult masterpieces Crowley wrote

after 1909, for its content summarize the Arcanas of all mystical,

Demons to some, Angels to others... 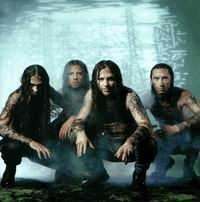