Brothers David and Jared Galligan have come from a family of faith and music. They were raised in a home where both parents were performing musicians, while their father also pastored churches full time. This fertile musical and spiritual ground rooted them in a life totally dependent on God, and with a dedication to expressing who He is through music.

As they grew in faith, they also developed their musical skills by singing and learning several instruments. David learned drums, then picked up guitar and bass, while Jared went from guitar to bass. The brothers performed in bands and played in church, while absorbing musical influences from both inside and outside the church.

The brothers garnered success in a band they formed in Dallas called "Elihu." The band captured national airplay with their techno/power rock song, "Free," and was among the very top drawing bands in the active Dallas area Christian alternative club and concert scene. After a time, the band dissolved. Taking all the lessons and musical insight they had collected from Elihu, the 2 brothers formed the tight knit band, "Unshaken." The band features David on guitar and lead vocals, Jared on bass and backups, Michael Wright on drums, with powerful synth-driven loops and tracks.

Unshaken’s musical influences include the power and fullness of Linkin Park, while matching the spirituality and edgy synth & guitar sound of Skillet.

While David is involved as the youth pastor at his father’s church in Dallas, the band is busy with an aggressive schedule of rehearsal, writing and performing throughout the North Texas area. They are again getting national airplay with their new material on KTPW in Dallas.

While their faith and renown continues to grow, the band remains Unshaken; a committed, focused, and spiritually grounded band, with a life changing message delivered in compelling, powerful music. 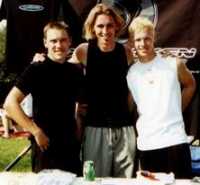