Columbia Nashville recording artist Trent Willmon is a study in contrasts so vivid that you can't help but fall under his spell. He has the moral values of a Boy Scout, yet he can raise rowdy hell on a Saturday night. He can kill a rattlesnake and tan its hide, but can also write a poem to touch the heart. This is a gentleman who uses "Sir" and "Ma'am" as a natural part of his speech. But on stage he can whip a honky-tonk crowd into a frenzy with a lusty howl. Trent has engagingly shy humility as a conversationalist, yet he has awards for public speaking.

He could repair your car in the morning, and then cater your dinner party in the evening. He can ride the roughest bronco and sing the sweetest love song. He handles a welding torch as well as he does a guitar. He loves both cattle roping and literature.

Is it any wonder that Trent Willmon's self-titled debut Columbia Records album has so many emotional dimensions, subtle shadings and colorful textures?

The infectious fun of his hit single "Beer Man" shows one side of this singer-songwriter's personality. But then there's the soaring, aching chorus of "Every Now and Then," an exquisitely painful ballad of loss and regret. Trent sings of romantic joy in "The Good Life" and of dreams that turn to dust in "Population 81." The rocker of small-town life "Dixie Rose Deluxe" contrasts markedly with the waltzing, wistful nostalgia of "Medina Daydreaming."

The album features such diverse delights as the bluesy, swinging "All Day Long" and the dark-sounding stomper "She Don't Love Me." The lead character in "Here" is a loving ghost. The heart-breaking "Home Sweet Holiday Inn" finds Trent pining for his daughter. And there's a room full of stories and portraits in the seering "Wishing Well."

How do you explain such a thoroughly rich collection coming from a debut artist?

"I guess I'm a kind of complex hick," Trent suggests. "In a lot of ways, I'm not your average West Texan. I've never really fit in anywhere."

"My dad was very conservative. But my mom was a liberal-minded hippie type. Thanks to growing up without TV, we had lots of literature around the house. I learned to read at a very young age, because that was the only form of entertainment. And there were also tons of records, of all kinds. I think growing up like that helps develop your artistic creativity."

His parents, now divorced, were completely different influences on him. Mother Billie was an urban, highly educated and artistic native of Houston. Trent describes his father Dean as a very simple and conservative retired school teacher and cattle rancher from remote, rural West Texas.

The closest dot on the map was the town of Afton, consisting of a post office, an abandoned cotton gin and a school that contained 100 students from kindergarten through 12th grade. There were seven in his high-school graduating class.

"The social gathering was the dance. They have dances in West Texas just like they had 100 years ago. They just look for an excuse to have one. They also have these great cowboy poets and storytellers. Combine that with the great musical heritage I grew up with, and what I do is kind of just a natural thing."

That heritage includes such West Texas talents as Buddy Holly, Joe Ely, Waylon Jennings, George Strait and Don Williams. Trent could two-step by the time he was 10. His mother gave him a guitar when he was 16. He won blue ribbons in the 4H and FFA for his livestock judging, cooking skills and speech-making abilities.

The land was hard and unforgiving. The Willmon ranch went bankrupt twice. When equipment broke, you fixed it yourself. As a boy, Trent saw cowboys crippled and made old before their time. His mother dreamed of getting him out of there.

His 4H and FFA honors won him a scholarship to South Plains College in Levelland, TX. As his father expected, Trent majored in Animal Science to get an Agriculture degree. But the influence of his artistic mother did not go away.

Like many youngsters, Trent ran wild once he was away from home. His grades plummeted. He lost his scholarship. Determined to continue at school, he sold his cattle to make tuition money. And when he returned, it was to the school's music department.

"My heart wasn't in it to continue with the Agriculture. I took a look at this music program. That's when the passionate side of me came out. I was like, �Yeah! THIS is what I want to do!' Concentrating on music, I built a guitar from scratch. I made the Dean's List. After my second year of college, I just went to playing in bands."

He performed with Texas honky-tonkers and western swingers. He even served a stint as a bluegrass bass player in The Karl Shiflett Big Country Show. But he realized that if he were to evolve as a songwriter, the move to Nashville was inevitable. He packed everything he owned into his '85 Chevy pickup truck and drove to Music City in 1995.

"I've never been a real aggressive kind of person, nor confident. But eventually I made contacts."

Trent's next job was riding and training steeplechase horses. Controlling these race horses requires tremendous strength and, for Trent, learning a completely new riding style. After about a year on the job, his shoulder was badly injured in a fall. Luckily, he was offered a songwriting contract at this point. DuBois, Brad Paisley and Frank Rogers had formed Sea Gayle Music. In 1998, Trent Willmon became the company's first signee. Julie Roberts, McHayes, Montgomery Gentry and Darryl Worley recorded Trent's songs as his career as a tunesmith progressed.

As his album demonstrates, Trent dove deeply into the craftsmanship of songwriting. Other outlets for his creativity were building a wooden boat, welding together a massive barbecue smoker and catering parties and rodeos.

But he missed performing, so he assembled a group called Cow Camp and began a three-year stint as the "house band" at a honky-tonk called Big Jim Country in rural Lewisburg, TN. The experience transformed Trent Willmon. He became a dynamic showman. His voice blossomed into a powerfully emotional instrument. Sea Gayle's Frank Rogers witnessed the star-making change, took Trent into the studio and began playing the results for record executives.

A 2003 record-label showcase at Tootsie's Orchid Lounge in downtown Nashville was a complete disaster. The sound was bad. The roof leaked. The band made mistakes. The company rejected him.

"After that happened, I thought, �I'm going to fail as a songwriter. As a singer, I'm no good. I'm going to pack up my stuff.' But I had enough people around me who said I had to keep going. I'm so glad that I moved on."

A second showcase, this time at the Douglas Corner Café in Music City, resulted in interest from four labels. Once Trent Willmon met with Sony's John Grady, the guy who "never really fit in" knew he'd found a home.

With Rogers in the producer's chair, Trent Willmon proceeded to craft an album that is stunning on every level. The self-titled collection is country to its core.

"Ever since I can remember, I've been a country fan. The other kids were listening to rock �n' roll. When I started rodeoing in high school, my bull-riding buddies listened to AC/DC and Stevie Ray Vaughan. I like that raw energy, and I've done songs like those in my live show. But country's always been my favorite kind of music."

He still competes at team roping, just about every weekend. But do not call Trent Willmon "a cowboy."

"I use that term with a sort of reverence," he explains. "It gets used loosely too much. I grew up with REAL cowboys, who wrote that occupation on their W-2 tax form. And they are a special breed. I know guys who are 65 years old, and they don't have a retirement plan. They're still working for 60 bucks a day. My heroes have always been cowboys."

And while we're on the subject, here's one more piece of advice. Have a beer with the "Beer Man."

"When I drink beer, everybody's my best friend."

On every note of the self-titled set, Trent Willmon connects powerfully as a songwriter, a singer and a personality. By the sound of this collection, country music does indeed, have a new "best friend." 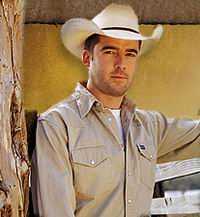