The Vaccines gave first taste of second album, debuted new song No Hope on May 28 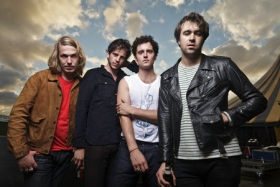 While The Vaccines prepares to perform Chazzstock on June 10, they've premiered the first single off second album The Vaccines Come Of Age. Debuted on Zane Lowe's BBC Radio 1 show, the track is titled "No Hope" and is a melodic song which was actually recorded completely live.

"We all felt it was a really good bridge between the first record and the second record," Justin Young said in the interview with NME. "You can progress without getting too weird," said Young of the direction of the follow-up to their 2011 debut album, What Did You Expect From the Vaccines? Young said that the band were currently in a studio outside of Bath, "just putting the finishing touches" to the album along influencial producer Ethan Johns.

New music: The Vaccines "No Hope"

"No Hope" will be released on 8 July, 2012 both digitally and on 7" single. It will include a new b-side "Blow Your Mind" as well as demo and live versions of the track.