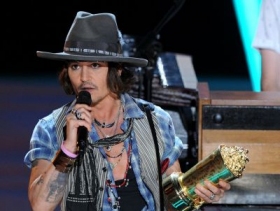 Honored with the MTV Generation Award, the actor/musician Johnny Depp also took the center of the stage on Sunday night, June 3rd at the 2012 MTV Movie Awards to cheer up the audience by playing the guitar along with The Black Keys.

Rocking the musical performance, Depp brought his yellow guitar, while wearing a wide-brim cap completed with his trademark cadre of accessories. The actor performed with Dan Auerbach-fronted rock band the band's hit Gold on the Ceiling. Before delivering the surprise jam, Depp was introduced to the audience by Aerosmith's Steven Tyler and Joe Perry.

"Steven [Tyler] just spit out one of my teeth," said Depp after the performance. "This is an amazing honor. It's like the get out of the business award. Based on the clips there is obviously something wrong with me. And it's an honor to be presented by these legends Stephen and Joe [Perry] and these up and coming legends The Black Keys."

Hosted by British funnyman Russell Brand, this year's MTV Movie Awards took place at the Gibson Amphitheatre in Universal City. The show was opened by a live performance from Fun., who are joined by Janelle Monae halfway through the set. Meanwhile, rapper Wiz Khalifa also threw a musical performance by singing his hit song "Work Hard, Play Hard".

Host Russell Brand set the mood with an opening monologue that included no less than four jokes about the male reproductive organ. The person in charge of censoring foul language was kept busy through the show. The Twilight Saga: Breaking Dawn - Part 1 won the highest honor, movie of the year, in the fan voting that continued online even as the show was underway. Meanwhile, "Twilight" stars Robert Pattinson and Kristen Stewart won for best kiss, an honor they received for the previous installment as well.

Johnny Depp with The Black Keys "Gold on the Ceiling"