Teairra Mari - No, No, No lyrics

You running out of luck, yea ya stars are not aligned

And now, played the last game with you for the last time

Threw the cards on the table can't take another round

Got these chicks callin me it's about to go down

You messy, I can't take a man who can't get his stuff together

Can't get his words together (you can go into whatever)

Keep my name out ya mouth, yeah the door has been closed

Every chick had yours, baby that's a no no

Gotta take it babe, you've been warned, so you know ya gotta go

To caught up in the wrong, oh no

Get ya bags and run, said ya messin with the wrong one

Take ya back and let it go, oh hell no

Did ya didn't think I'd find out, she was chilling at the house

Yea ya tried to clear it up, baby I don't give a what

Boy ya know ya free to go, changing what was wrong before

Thought it was about you, boy ya acting brand new

Save ya money, flowers and cards it ain't working out

But cha can't have my love, oh no no

I thought about it I don't want it, I don't need it, naw

The games, the problems, the drama, yea they can have it all

So I don't know why y keep callin my phone, mightest well leave me alone, cause ya know I'm a say no

And quite frankly I'm sick and tired of your bull shh, my time is exclusive, ya lying is useless 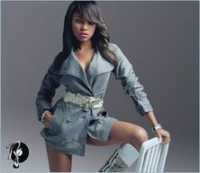