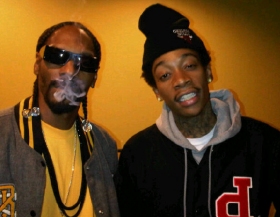 Snoop Dogg and Wiz Khalifa just premiered their music video for the single That Good. After appearing together with T-Pain and Three 6 Mafia's Juicy J in a music video for Black and Yellow remix, now they pair up for That Good clip, declaring their love for weed.

That Good is a duo-track recorded for their straight-to-DVD movie called High School. This film is due June this year, in which Snoop plays a character named Cheech and Wiz stars as Chong. "In high school, we do just like we like to/ We cordially invite you/ Now roll up get high to it," they coo.

The two rappers have recorded something for Snoop's new album Doggumentary Music, and he might return the favor by appearing also in Wiz's future project.