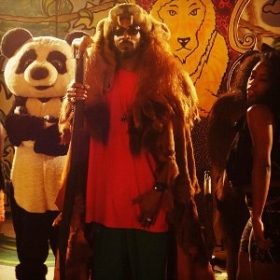 Snoop Dogg has reincarnated himself for Haloween spirit in Snoop Lion for his new video "La La La." This is the first single from his forthcoming reggae album "Reincarnated," which is set to be released in 2013. "It's one of those records that just celebrates fun, trick or treat in so many words," Snoop said about his upcoming album.

The video was directed by the movie director Eli Roth, who worked in horror movies and was premiered on October 31 above the Las Vegas Strip on the world's largest LED screen. The clip is a real fun-party where the rapper asks his little guests why he changed his name.

Snoop is dressed in a tooth-tiger costume, while he dances around a painted jungle surrounded by little kids and sexy women, that "dancin' shakin' and bakin', makin' it move to the music and the sounds of Snoop Lion."

The rapper pretends to be the reincarnation of Bob Marley. "A lot of kids, a lot of costumes, you know lion in the jungle, just having a good time."

"I've always been a fan of my nephew Eli's work and had a vision of working with him for a minute now," said Snoop. "For this video, I wanted to do something different—something I wasn’t able to do with my other music. This collaboration really shows how creative we can get as a 1-2 combo. He's Dwight Howard and I'm Kobe Bryant. We feed off each other. It's a dope video and offers my fans a first official look at Snoop Lion."