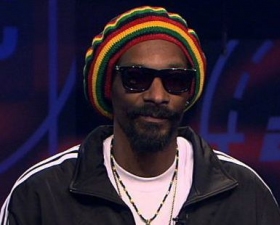 The famous rapper Snoop Dogg has just released a reggae-inspired track "La La La" under a new moniker Snoop Lion. Reportedly, it's a cut from his upcoming record appropriately titled Reincarnated, due later this year on the Vice label.

The chart-topping rapper, who was arrested in Texas earlier this year for marijuana possession, adopts a faint Jamaican accent in the newly-released track, while his guest Jovi Rockwell provides the background vocals. A smooth bass line is heard along with upbeat percussions. He said in a Twitter message to his fans, "The world needs more love right now. wisdom. guidance. protection." The reinvented artist recorded the song in Jamaica with DJ Diplo and the Major Lazer team as producers. "The record is hot. Shot out to diplo n jovi. She's amazing. Lalalallalalalalal," he also shared on Twitter.

On his Tumblr, Snoop provided details on his first live performance under the new moniker. The rapper has been set to perform in a gig dubbed "Caribana 2012: Snoop Lion In The Jungle." He hyped it up, "For the first time ever, watch Snoop Lion in the Jungle on August 3, 2012 in Toronto!" Original, dub style-inspired and just la-la-la-la-la!! Listen to the track below.

Earlier this year, Diplo announced the project with the hip-hop star. "Snoop Dogg is an icon, man; he's bigger than the music," he told MTV News about the rapper. "It's all reggae and he's singing and he's doing a f***ing awesome job and I never knew it, but he had his heart in every song," he said about the new record back in March.

About his new album, Snoop Snoop said he would be "re-born". The hip-hop star said that despite being 11 solo albums into his career, his fans have yet to see the real him, but he hopes that will change with his next record. "This record gives me an opportunity to the world of the stadium," he said. "Those are the kind of songs that last 40, 50 years."