Sonny John Moore (born January 15, 1988) is an American electronic dance music producer who is widely known by his professional name Skrillex. Moore is also a former frontman for the American band From First to Last.

In late Autumn of 2007 he embarked on his first tour as a solo artist, the Team Sleep Tour with Team Sleep, Strata, and Monster in the Machine. After recruiting a new band lineup, Moore toured North America on the Alternative Press Tour, supporting bands such as All Time Low and The Rocket Summer, and appeared on the cover of Alternative Press annual 100 Bands You Need to Know issue.

In June 2008, Moore went into recording for his debut album, titled Bells, alongside producer Noah Shain. He released the Scary Monsters and Nice Sprites EP as a co-release between mau5trap and Big Beat record labels, and runs an imprint label called OWSLA, named after an organization in the book Watership Down.

He was nominated for three Grammy Awards in 2011, including Best New Artist.On December 5, 2011, the BBC announced that he had been nominated for the BBC's Sound of 2012 poll.

In late August 2011 it was released that he would be appearing Knife Party's first release, collaborating on a Moombahton style track entitled "Zoology". A preview was released on Youtube. In late September of 2011 he created the track "Syndicate" as promotion for the video game of the same name.

The video for Skrillex's song "First of the Year (Equinox)" appeared on the first episode of the Beavis and Butt-head revival.

On November 8, Skrillex confirmed the EP entitled 'Voltage'. Skrillex gave fans more info about Voltage in RockSound Magazine after a photoshoot for the cover and doing an extensive interview on his tour. 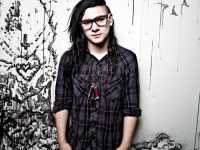