and I gaze through my small cobweb curtains, down through the arches

that are made from the wings of the bees &amp; the moths that are dead

Fairytale children are dancing like jewels in the morning

the butterfly aeroplanes land on a runway of roses

and the policemen cockroaches are standing by watching the fun

I hear three bluebells ringing in a steeple of heather &amp; roses

and the gamekeeper fairy who lives in a mushroom nearby

plays a lute made of pinewood &amp; oak and plucks cottonwool strings

the grasshopper coachmen are harnessing mice to my carriage

Farewell to the appleseed pavements and moss covered roadways

the tall mushroom castles, fairytale children and all

I may never again chance to fly upon dragonfly wings 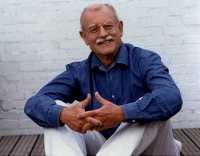