As the driving force of matchbox twenty, Rob Thomas is widely acknowledged as one of the most distinctive vocalists and gifted songwriters in contemporary music. Since making their debut in 1996, matchbox has evolved into one of the most admired and consistently successful rock bands in recent history, with over 25 million albums sold worldwide.

As matchbox twenty’s primary composer, Thomas has penned a remarkable string of chart-topping hits, including “Push,” “3AM,” “If You’re Gone,” “Bent,” “Real World,” “Back 2 Good,” “Mad Season,” “Disease,” “Unwell,” and “Bright Lights.” matchbox has earned the distinction of having had more #1 hits and spending more weeks at #1 on both the national Modern AC and Adult Top 40 charts than any other artist in history.

Rob’s growing reputation as an exceptional songwriter has led to invitations to collaborate with a select list of artists – most notably Santana, for whom he wrote and sang the smash single, “Smooth,” which earned Thomas three Grammy Awards. He has also worked with the likes of Willie Nelson, Marc Anthony, Mick Jagger, and Bernie Taupin. Combining all of his projects, Thomas has contributed to the sales of over 75 million records. He has earned 13 BMI Awards, including both songwriter and song of the year, and he was named Billboard’s Songwriter of the Year two years in a row.

In June 2004, the Songwriters Hall of Fame presented Thomas with its first-ever “Starlight Award” – created to recognize a songwriter in the early years of his or her career who is already making a lasting impact. Rob’s composing talent has also been acknowledged with cover stories in American Songwriter (which named him songwriter of the year) and Performing Songwriter.

Rob and his wife have established Sidewalk Angels Foundation, a non-profit organization created to aid those in need in and around America’s big cities – working with various charities to assist people who are destitute or homeless and get lost in the system; those who cannot afford proper medical care; and animals that have been abandoned or abused.

Sidewalk Angels Foundation takes its name from the lyrics to Thomas’ solo recording, “A New York Christmas.” First released in 2002, the single’s sales that year benefited Blythedale Children’s Hospital in Valhalla, N.Y. Reissued for Christmas 2003, the single’s proceeds were given to Pets Alive, a no-kill animal shelter in Middletown, NY. In August 2004, a benefit concert in New York City featuring Rob, Jewel, Daryl Hall, and Rhett Miller raised over $100,000 for Sidewalk Angels, which in turn donated the evening’s proceeds to Pets Alive.

Born on a military base in West Germany, Rob spent much of his youth shuttling between his grandmother in South Carolina and his mom in Florida. After dropping out of both high school and his difficult home life, the 17-year-old drifted around the Southeast, hitchhiking and crashing where he could. The only constant in his life was music, an inspiring soundtrack that included artists ranging from Al Green and Van Morrison to Elvis Costello and Elton John. He released the pressures of his life in his songwriting, at the same time developing his signature vocal style while fronting a number of local rock bands – which ultimately led to the formation of matchbox twenty.

With the forthcoming release of his debut solo album, Thomas begins a new chapter in his remarkable musical journey. 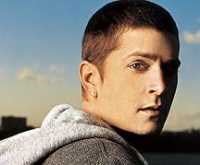