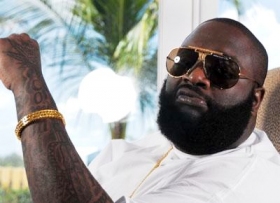 Rick Ross' Sweet Life music video is out for viewing pleasure with "The Untouchable Maybach Empire" as the tagline. The clip sees the 34-year-old rapper dressed in a similar suit with his featured guest John Legend and spitting his verses in front of a caged tiger.

Sweet Life is listed in Ross' newly-released mini album "The Albert Anastasia". The music video is directed by Ross' longtime collaborator Spiff TV who has directed almost all of his freestyle videos in the past couple of years.

"Albert Anastasia" is put out to tide fans over until Rick Ross' new full-length album "Teflon Don" is ready for release. P. Diddy, Trey Songz, Birdman and Ne-Yo are among collaborators line-up.