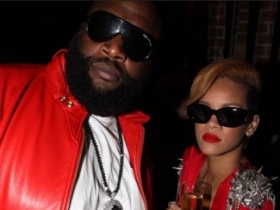 As well as dropping off his Usher assisted single "Touch 'N You" from his fifth solo studio album God Forgives, I Don't, Maybach Music Group titan Rick Ross dropped off a visual accompaniment to his take on Rihanna's single "Birthday Cake" from her Talk That Talk album.

The video directed by MMG's in-house video machine Dre Films features footage from Rozay's European Rich Forever Tour adventures(Paris and London's O2 Arena), while images with Rihanna from her clip with Drake and not only are flashing on the screen. The clip is mostly a promo, as many upcoming projects from MMG artists are shown during the whole clip, from Meek Mill's DreamChasers 2, to MMG's Self Made 2 mixtape (coming out June 26), or Rick Ross' God Forgives, I Don't album (in store July 31.)