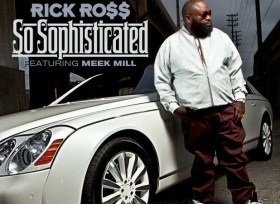 "It's Lil Tunechi/ Wattup doe?/ I'm talking white girl, Marilyn Monroe/ And I can get em for the sweet sixteen/ Hard doe, call it HD Flat screen/ F-ck outta here, no shit water whip/ you got that tan though, look like a Florida bitch/ Automatic leave you dead in the living room", Lil Wayne completes his verse.

Meanwhile, another music video wearing Maybach Music's production staple has made its way online. This time, Rozay shares the screen with Meek Mill for the single "So Sophisticated" which will appear on Rick's forthcoming LP God Forgives, I Don't. Premiered on Sucker Free MTV, the clip features the shirtless rapper delivering his verses while in a dark room, or in the front of his luxurious car. Don't really get what's the ideea with the slacks of meat hanged and smashed during the visuals.