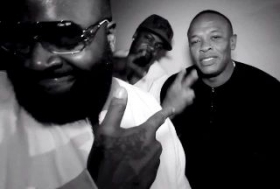 The "3 Kings" track recorded by three great rap artists Rick Ross, Jay-Z and Dr. Dre enjoys now a great visual, which was recently revealed. The clip, a Dre Films production, opens up with a lot of footage narrating Dr. Dre's fast-rising career as the Doc spits out his verses. At one point, the rapper and producer is joined by a topless lady.

Rozay comes up next by rapping his own lines while black-and-white montage including shots of great personalities such as Martin Luther King Jr. and President Obama is shown. Jay-Z follows the two rappers delivering his rhymes while lounging with Beyonce Knowles and juggling his multiple works as a performer and businessman. The montage is entirely black and white, but the message about what it means to be black and successful in America is anything but. it's an interesting and pleasant viewing. Check it out below.

"We cooked up a masterpiece. This is a big joint right here," Ross once proudly said about his upcoming album. "I feel it's the biggest collaboration in hip-hop. Not just this year, maybe previous years."

"I got on the phone with Dre and he was gonna come down in Miami. First night in the studio we went and did five records," he remembered. "Jay-Z, that's my big homey man and from day one anything I've ever asked O.G. for he always came through for me, so it's vice-versa."

The song will appear in Rozay's upcoming album God Forgives, I Don't.