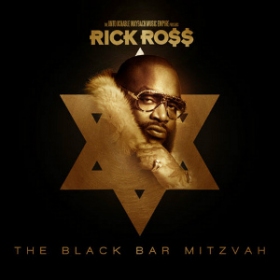 The MMG Rick Ross is back on his grind and he plans to offer his fans his newest mixtape on Monday, October 8th, even if his No. 1 album "God Forgives, I Don't" reaches a gold status. The mixtape entitled "The Black Bar Mitzvah" includes remixes, freestyles over current radio hits and past hip-hop classics.

This is a follow -up from his last mixtape from January "Rich Forever" where he released his track "Stay Schemin" with Drake and French Montana.

His artwork shows that he has an affinity for the Jewish people and we can see that in his project.

You can see Ross along with his Maybach Music Group labelmates Meek Mill and Wale on the "MMG Tour" on November 2 in Columbus, Ohio.