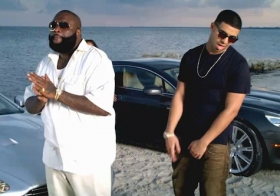 Check out the latest single from Rick Ross called Made Man.
Rick Ross called The Breakfast Club show on Power 105.1 radio station on Tuesday morning, January 4 to debut his new single Made Men and talk a bit about the album that will follow. The song has Ross joining forces with Drake, and together they rap about Katy Perry, Wiz Khalifa and other fellow artists.

Their verses are like this: Ross goes with, "Two-door Bugatti coupe, I call it Katy Perry/ Wiz Khalifa papers, my favorite berries/ That '65, I call it Rihanna/ It got a red top but it's white like Madonna." As for Drizzy, he spits, "Spending tomorrow money, I call it manana/ Off the rack just ain't my style, I call a designer/ One of my baddest women ever, I call her Rihanna/ But that's because her name is Rihanna."

In the interview, Rick Ross revealed God Forgives, I Don't as title of his new album. He said the newly-unveiled song was originally recorded for his latest mixtape Ashes to Ashes, but he decided to save it for the studio effort which is expected to arrive later this year.