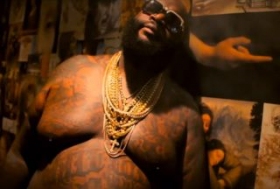 Maybach Music boss Rick Ross has unleashed a political-inspired music video supporting his latest Elijah Blake-assisted single "Presidential". The visuals itself opens with President Barack Obama's fiercy speech during recent DNC in front of thousands of his devoted supporters, before it cuts off to scenes which see Rozay counting his money and partying like a president with his friends P. Diddy and French Montana among others.

Directed by DRE Films and Spiff TV we also get to see the MMG boss shirtless (as we were used from his previous videos) while rapping his verses. He's flashing a lot of money too. A bikini-clad lady is also featured oozing her sexiness as she poses seductively for the camera. At some points, the clip shows Elijah Blake singing his part in front of a plain background. He dons a red vest and sunglasses to team his long-sleeved patterned shirt.

"Girl I think you're special/Strictly presidential," so Blake sings smoothly in the intro. "The gold presidential just to sport around/I'm from the era of fitted caps and rental cars/Dope pushers with ambition and pretty broads/Walking on Jewish marble, hand painted the ceiling/Happy Hanukkah n***a, it's a wonderful feeling," Rick spits his verse.

"Presidential" was lifted from Rozay's album God Forgives, I Don't, which has been released in the U.S. since July 31.