The soundtrack was released May 5, 1998, ten days before the film's release. Although the film was not a critical or commercial success, the soundtrack did receive a certain level of praise. The album peaked at #117 on the Billboard 200, and won the Golden Globe Award for Best Original Song for "The Prayer", and was also nominated for the Academy Award for Best Original Song, also for "The Prayer" (though it lost the latter to "When You Believe" from DreamWorks' The Prince of Egypt).

The soundtrack is quite well known due to the celebrity vocals present on it, such as Celine Dion and Andrea Bocelli singing "The Prayer", LeAnn Rimes singing her single version of the movie's romantic duet, "Looking Through Your Eyes", The Corrs singing "On my Father's Wings", "Looking Through Your Eyes" and Steve Perry singing "I Stand Alone", which is also featured on his "Greatest Hits + 5 Unreleased" album. Gary Oldman is also on the soundtrack, singing Ruber's theme. "The Prayer" was nominated for an Academy Award for Best Original Song at the 71st Academy Awards and won the 1999 Golden Globe for Best Original Song - Motion Picture. One of the Celtic Woman members, Chloë Agnew covered "The Prayer" in full English. Another member of the same group, Deirdre Shannon and her brother Matthew, a former Celtic Tenor covered it for her solo album. Another rendition of "The Prayer" was performed at the Closing Ceremonies of the 2002 Winter Olympics by Josh Groban and Charlotte Church. 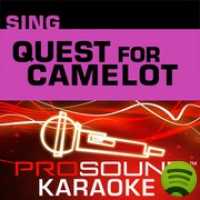