The rolling landscape of the Australian outback and the roiling music scene of Los Angeles meet in the civilized sounds of Life In Volcanoes, the Nettwerk Records debut from Povi. Named after a Native American word for flower, Povi is the result of a collaboration between two distinctly inspired sources: expressive vocalist Cristina Calero from Down Under and Los Angeles-based producer/musician Carmen Rizzo. Carmen has co-written songs for Seal, remixed tracks for Fiona Apple and Prince, programmed Alanis Morisette's "Uninvited" and mixed songs for Robbie Robertson and Ryuichi Sakamoto. Cristina spent the last few years recording and performing with various bands in Australia, experimenting with jungle and drum 'n' bass sounds, including one project with a DJ and a didjeridoo player.

Life in Volcanoes was developed extemporaneously by Carmen and Cristina, but together they had the same goal: to allow a "complete album" to develop organically through collaboration and experimentation.

It all started when Carmen was mixing a band in Sydney, Australia and struck up a friendship with Cristina, who was recording with another band in the adjacent studio. After hearing her remarkable voice, Carmen knew Cristina could complement the music tracks he had been working on in between producing other artists. The musical chemistry grew as they traded experiments on tape long-distance, and reached the boiling point when they reconnected in Los Angeles a year later to continue the journey that led to the creation of Life in Volcanoes.

Carmen recruited musicians he refers to as "family" for the band - keyboard player Jamie Muhoberac, guitarist/bassist Chris Bruce and Alanis Morissette's guitarist Joel Shearer - who together produced languid, exotic grooves with a hypnotic dub texture, punctuated by Cristina's alluring, ethereal vocals. It's music that insinuates itself into space like smoke, enveloping you in its seductive haze. "I wanted a very vibe-y sound," Carmen explains. "In the last few years I had become interested in blending the new textures of electronic music with more familiar sounds of acoustic instruments. As Cristina and I got to know each other better, this multilayered sound deepened and expanded, and by the end she had added a storytelling element that became a third key ingredient. I finally had an opportunity to make a record to please myself and my friends with the backing of a label that trusted my vision."

Cristina's lyrics breathe life into Life in Volcanoes' subtle power; they were mostly inspired by her first visit to Los Angeles. "It's the most daunting place I've ever been," she says. "When I got off the plane, I could feel the aggression and desperation." As she grew to understand the unique dynamics of the City of Angels, Cristina created lyrics that "reflect the tension I was feeling between the fulfilment of realizing a musical dream and the stress of working in a strange concrete city so far from my friends, my family, and the natural beauty of my home in Queensland." The first single "Dragonflies" is about "needing the same things, even though you are in a new place," Cristina divulges. "It's also about falling in love."

While Carmen and Cristina share many of the same influences, they brought different passions to Povi. Carmen knows how to give even the strangest sounds a commercial sheen while Cristina wants everything to be rough and moody. The result is Life in Volcanoes, an undeniable breath of fresh air from a collaboration of equals. 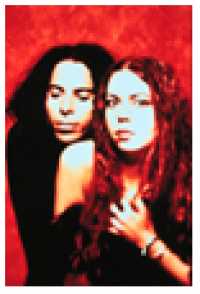