At the palms chilling with the martini

Your commander in bikini

Let me tell you bout my policies

To stop the player hating on the USA

You can ride in the motorcade in my hybrid pink Escalade

Not another oldie cliche

You can get married if you're straight or if you're gay

If you're gonna put lipstick on a pig

Make sure that it matches her skin tone

You can trust me with my finger on the button (nucular)

Its' a vocabulary don't

Trading in the cabinet for a walk in closet

America should put me in charge

Look at Bush, it can't be that hard

But when his oldies kicked the bucket

I'll put him on the courts supreme,

Then I'll paint the white house pink and move ? to Maui

A proponent of clean energy

The real maverick in DC

Waterboarding is torture and global warming is totally not hot

Boost the economy with all of the new jobs

Make over lady liberty in Donna, Tommy and Calvin Klein

Get your cute little butt out there and vote,

To spread some beauty tips and hope

I'm Paris Hilton and i appprove this message

Thanks to The coolest. for these lyrics

Thanks to Julian Leong for these lyrics 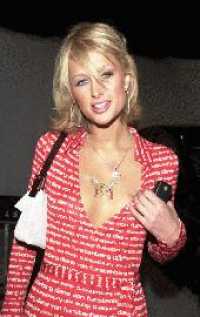