Watch the music video 'One Thing' from British boyband One Direction 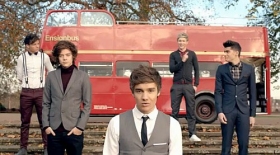 The British boyband, who gained fame with their participation on "The X Factor", season 7 have debuted the much awaited clip in support of their latest single "One Thing".

Premiered last Friday, January 13th the clip gathered on their YouTube channel more than 3,5 million views in just three days! We see the boys cruising around the town - London - in a red double decker bus and giving an impromptu performance for their female fans.

During a recent interview on Capital FM, Harry Styles said of the video concept, "It was literally us being idiots around London for a day and we filmed it." Liam Payne added, "It was good. We got to run round London." On the day the video premiered, Harry tweeted, "We had an amazing time filming it so hope you like it too."

Video premiere: One Direction "One Thing"

"One Thing" is lifted from November 2011 released album Up All Night, and thanks to their first single off the album "What Makes You Beautiful" boys have scooped a nomination for British Single at the upcoming 2012 BRIT Awards.