One Direction will perform on Sunday at Olympics closing ceremony 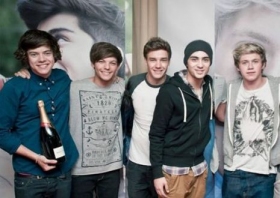 While Muse recently confirmed they are set to perform at the Olympics closing ceremony, the British boyband One Direction are also due to perform on Sunday night.

The boys are reportedly performing their hit "What Makes You Beautiful" from a carnival-like flat-bed truck which will be moving around the athletics track.

A source told the Daily Mirror: "It's all hush-hush and the boys have been sworn to secrecy. But they've been at rehearsals and can't wait to do their bit. It will be an unforgettable occasion and they feel privileged to be a part of it."

The boys have been tweeting their excitement over the Olympics with Niall saying: "Don't know if it's just me, but the excitement in London is unbelievable! Its gonna be a great games."

Liam added: "If I wasn't in 1D, running the olympics would of been my dream :)".

Take That are also supposed to be performing but it is unsure as to whether they will, following the news that Gary Barlow and his wife's daughter was stillborn.

Music video: One Direction "What Makes You Beautiful"

Rockers Muse have been the latest act to be confirmed. The band, who actually penned the official Olympics track "Survival", will play the track live at Sunday's closing ceremony. "I'm happy with the song. It's a proper Muse song," drummer Dom Howard recently told NME.

Before adding, "It's not something we did for the Olympics. They sowed a seed by asking us to do some music but then five months went by. We showed them a few songs when they asked us about [playing the] closing ceremony and they loved it. It represented the enormous competition of what the Olympics is".

Other acts rumoured to perform include The Who, George Michael and the Spice Girls. Exciting stuff, ain't it?!