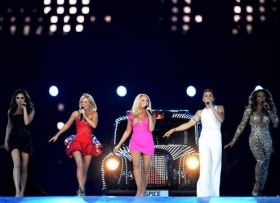 Several greatest British artists gathered last night in London, for the 2012 Summer Olympic Games closing ceremony. From young musicians such as One Direction, Jessie J, Ed Sheeran, Tinie Tempah to legendary Queen, Pet Shop Boys and Take That just to name a few have performed on Sunday, August 12th at the Olympic Stadium in a star-studded closing ceremony celebrating the end of the games.

Scottish singer Emeli Sande kicked off the opening ceremony with a piano-accompanied performance of "Read All About It", as she performed from a custom-built stage designed to feature several of London's biggest landmarks, such as Big Ben and the London Eye. He was followed by ska band Madness, who performed their memorable hit "Our House". The Olympic Stadium was then backed by a number of volunteers staging street parties.

British boyband One Direction followed veterans Pet Shop Boys, with the performance of their hit single "What Makes You Beautiful". They burst into the Olympic Stadium on the back of a moving trailer, and received one of the biggest cheers of the evening.

Harry, Zayn, Liam, Louis and Niall stepped off their trailer onto a platform for the middle section of their breakthrough hit, before returning to the trailer for a final victory lap of the arena. After their performance, the cast of London musical Stomp gave a lively show, before Britain's Got Talent act Spellbound also appeared for a performance.

The Kinks frontman Ray Davies then arrived into the stadium to huge cheers to lead the crowd their signature song "Waterloo Sunset".

As one of the big events of the night, the iconic girl band took the stage and performed their hits "Wannabe" and "Spice Up Your Life" to end the Olympic Games. The iconic nineties girl band arrived into the Olympic Stadium in brightly lit taxi cabs to huge applause from the thousands strong audience, before joining each other in the centre of the stage to sing their debut hit single "Wannabe".

After the Olympic flame was officially passed on to the mayor of Rio De Janeiro Eduardo Paes, ready for the Olympic Games there in Brazil in 2016, Take That emerged for one of the penultimate performances.

Despite much speculation surrounding their appearance, Gary Barlow joined bandmates Howard Donald, Mark Owen and Jason Orange for a firework accompanied rendition of "Rule The World", before The Who closed out the London 2012 Olympic Games closing ceremony with several hits culminating in their 1965 signature song "My Generation".

"What Makes You Beautiful" One Direction for The Olympics closing ceremony:

"Wannabe" & "Spice Up Your Life" Spice Girls for The Olympics closing ceremony:

Emeli Sande - 'Read All About It'
Madness - 'Our House'
Pet Shop Boys - 'West End Girls'
One Direction - 'What Makes You Beautiful'
The Kinks - 'Waterloo Sunset'
Elbow - 'Open Arms' ; 'One Day Like This'
Kaiser Chiefs - 'Pinball Wizard'
Annie Lennox - 'Little Bird'
Ed Sheeran feat. Pink Floyd - 'Wish You Were Here'
Jessie J - 'Price Tag'
Tinie Tempah - 'Written In The Stars'
Taio Cruz - 'Dynamite'
Jessie J, Tinie Tempah and Taio Cruz - 'You Should Be Dancing'
Fatboy Slim - 'The Rockafeller Skank'
The Spice Girls - 'Wannabe' ; 'Spice Up Your Life'
Beady Eye - 'Wonderwall'
Eric Idle - 'Always Look On The Bright Side Of Life'
Muse - 'Survival'
Jessie J feat. Queen's Brian May - 'We Will Rock You'
Take That - 'Rule The World'
The Who - 'My Generation'