One Direction revealed upcoming single Heartbreaker due in fall 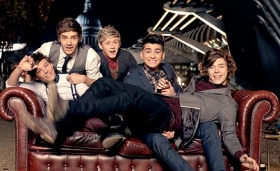 The five sensational British boys of One Direction have recently announced their next single! Already! The band previously announced that they'd have a new album out by Christmas 2012, and now they got some more details for their Directioners. 1D confirmed that their next new single will be "Heartbreaker", due out this November (Nov. 20 in the U.K., Nov. 27 in the U.S., Nov. 28 worldwide). The track, produced by Carl Falk, Rami Yacoub and Savan Kotecha, will hit radio Nov. 26 — just in time for holiday stocking stuffers!

Ed Sheeran is one of the fellow artists to contribute to the sophomore release. Sheeran confirmed the news to MTV U.K. "I wrote a couple of songs when I was 17 that One Direction want for their next album," Sheeran told MTV. "I'm going into the studio in August to produce the tracks for them. I won't feature on the tracks though, he clarified, noting, There's definitely a divide in genre.

Sheeran isn't the first pop star to offer his songwriting talents to the X Factor alums. Kelly Clarkson penned "Tell Me a Lie", then gave it to the adorable blokes at Simon Cowell's insistence.