One Direction does 3D concert movie, set to release November 2013 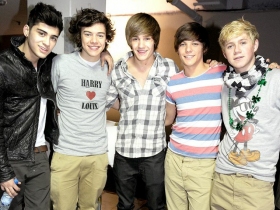 While the British boyband One Direction is set to release their Up All Night The Live Tour DVD, the boys are also preparing a 3D concert film which will hit theaters on November 8, 2013.

There weren't revealed many other details, but it makes sense for The X Factor U.K. imports to hit the silver screen, following the footsteps of fellow heartthrobs Justin Bieber and the Jonas Brothers. Meanwhile, reports says that Harry Styles is also starring in another movie, He is said to be in talks to star as Mick Jagger in a film about the Rolling Stones. Sony Pictures is said to have titled the movie One Direction Concert Movie, which will presumably feature footage of their upcoming 2013 tour in support of their forthcoming sophomore album, also due out in 2013.

Music video: One Direction "What Makes You Beautiful"

Recently, the boys have performed at the Beacon Theater in NYC on Saturday May 26. Thousands of girls and a handful of boys were shrieking dutifully even before the five young men — Harry Styles, Zayn Malik, Louis Tomlinson, Niall Horan and Liam Payne — appeared, and they kept it up all show long, a ritual act far more important than that other ritual, of song and dance, taking place onstage. This was the first of two Beacon concerts that day and it came on the heels of an even larger one at the Izod Center in East Rutherford, N.J., the night before.

Impressively, the group stretched one 45-minute album into a show almost twice that long. They also covered some great hits such as Natalie Imbruglia's "Torn", the Black Eyed Peas' "I Gotta Feeling" and, perhaps a little overly maturely, "Use Somebody" by Kings of Leon.

Up All Night: The Live Tour will be released on DVD on Tuesday, May 29.