One Direction band deepest secrets will be revealed 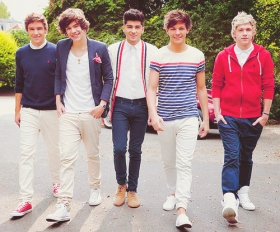 One Direction band will let cameras into the dressing room for their 3D movie.

The boy band are giving fans a glimpse into their day to day lives in One Direction: This Is Us, which hits screens from August.

Niall Horan and bandmates Zayn Malik, Harry Styles, Louis Tomlinson and Liam Payne were filmed in even the most intimate situations.

"It is more of a documentary than concert; a behind-the-scenes insight into what goes on," Niall said

"The fans standing outside the stadium, they don't know what goes on in the dressing room."

The boys have amassed an army of adoring fans since 2011 smash super hit What Makes You Beautiful.