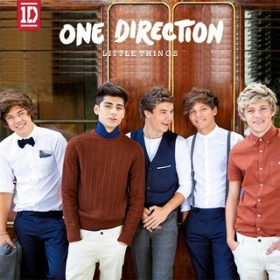 The British Boy Band One Direction releases a new single called "Little Things." The song was written by Ed Sheeran and will be included in their upcoming album "Take Me Home," which is set to be out on November 13.

"Little Things" is a soft ballad that opens with a melodic guitar play and was premiered on radio. This acoustic track doesn't disappoint us. The writer Sheeran wanted to show to the listeners a new different side of the band, with wistful vocals and this song fits very well for them. "I think they just wanted to try something different. I think they did the same formula with the last single - it sounded like a One Direction song - and now I think they want to switch it up a bit."

He also said in an interview that the ballad "Little Things": "It is kind of a very sweet song. It was written about the best things about someone, kind of like the things you wouldn't expect. You'll have to hear it. I can't really say too much 'cause it's their album. I want them to be the first ones to announce it and stuff."

The lyrics are touching and catchy: "Your hand fits in mine like it's made just for me / But bear this in mind, it was meant to be / And I'm joining up the dots with the freckles on your cheeks / And it all makes sense to me."

Watch the lyric video on their Vevo Channel to debut the song.