Johnny Depp jams with One Direction 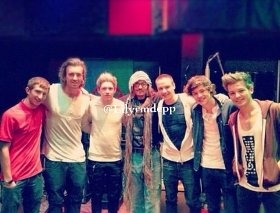 The "Pirates of the Caribbean" star invited the Brit-Irish boys One Direction to his home recording studio in Los Angeles after Johnny's daughter Lily-Rose Depp request. "Johnny found out 1D were in town and, after making a few calls, they came round to his studio.
So he "brought out his piano and guitars for the boys to test and they had a little jam session. Lily-Rose just watched with her blushing mates while her dad temporarily joined the world's biggest boy-band."

We already know that Depp is a passionate rock guitarist, as he previously joined other rockers like Alice Cooper and the Black Keys on stage, and also his friend David Furnish's 50th birthday.

Lily-Rose was extremely excited by their presence and she posted on her Twitter account that One Direction boys were "proper English Gentlemen."

One Direction recently released their second album, "Take Me Home," which is expected to be a NO. 1 hit in several countries. They have promoted their sophomore album in the U.S. where they have been meeting huge celebrities as Michael Buble, Jay-Z and Ellen DeGeneres.