When cops are taking care of business I can understand

But the L.A. story's gone way out of hand

Their acts of aggression, they say they're justified

But it seems an obsession has started from the inside

They're shooting anyone who even tries to run

Take it to a jury but they don't give a damn

Because the one who tells the truth is always the policeman

Beat all the niggers

Beat whoever you see

With helicopters overhead and bullets whizzing by

Beat all the white trash

Beat whoever you see

They say they're keeping the peace

It's an excuse for power that's more like an alibi

When you're the one getting bruisedand battered

You take it to a jury, they'll throw it in your face

Because justice in L.A. comes in a can of mace 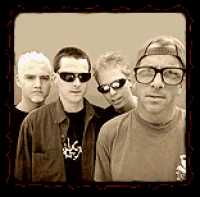