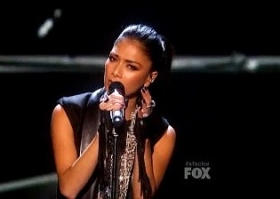 Wearing a tough black outfit, with her hair locked in a high ponytail, Nicole delivered a love song with simple lyrics which tells the story of a past relationship and a special man who used to make her fell "pretty". The track is includes on Nicole's U.S. delayed album Killer Love.

Chris Rene, Melanie Amaro and Josh Krajcik are the three contestants to battle for the X Factor title next week, on December 21st.

The other musical guest on the Dec. 15th results show was British band Florence & The Machine. Led by Florence Welch, the "No Light, No Light" performers catered the audience with a live debut of their song "Spectrum". Watch them below: