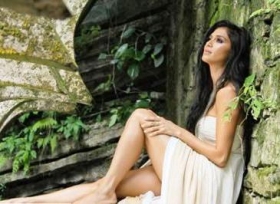 The 'X Factor' female judge, Nicole Scherzinger premiered her brand new video for the single 'Try With Me' in which she filmed in the Xilitila rain forest, in a rural Mexican village. Wearing a white strapless long dress, Nicole looks as breathtaking as the nature around her does: clear river, waterfalls, plenty jungle trees, a moss-covered piano.

Nicole is all alone in the video, and she dances in the middle of nature with her raven hair like she's at her home.

Watch below Nicole's music video directed by Aaron Platt and Joseph Toman 'Try With Me':

'Try With Me' is released as a lead single from the re-release of Nicole's first solo album Killer Love.