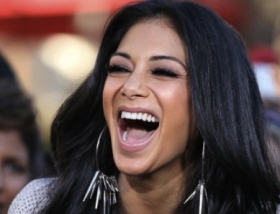 The X Factor judge, Nicole Scherzinger is set to perform a brand new song tomorrow night, December 15 during the final. Teh announcement was made on Twitter by Interscope Promotion:

Speaking with the official website about performing her Patrick Smith-produced song, Nicole said: "I am nervous, however, to perform the song because I've never performed it before. We just finished recording it and we're still working on the production of it."

She added: "I can't wait for my fans to hear it. The lyrics are unbelievable and hopefully people can relate to it... This is really coming from my heart and soul, so hope you feel it."

She has now left with one contestant, Josh Krajcik who will perform tonight, December 14th in the semifinal along with the other three remained singers: Chris Rene, Melanie Amaro and Marcus Canty. Thursday night's final show will see this season's final three named and also feature a performance from Florence + the Machine.