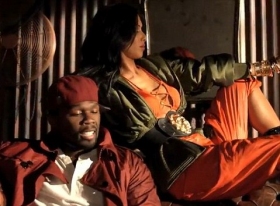 The rap artist, also known as Fiddy, was not actually there when Nicole filmed the video and his segments have clearly been recorded separately.

Nicole, who has been rumored as a possible co-host for the U.S. X Factor, wears an array of sexy outfits throughout, including slinky harem pants and a cropped vest top which shows off her honed stomach to perfection.

Things eventually erupt into a sultry dance party as Nicole and her ladies shake and grind in what appears to be an empty warehouse space-turned-nightclub.

In a recent interview, Nicole said she is no longer in touch with her former Pussycat Dolls band mates.