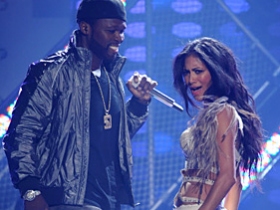 Nicole Scherzinger and 50 Cent were last night's special guest performers on American Idol. They both took the stage and performed their brand new collabo 'Right There'. The song was taken from Nicole's new LP Killer Love which will be in stores August 16th.

Scherzinger, a former Pussycat Doll and 'Dancing With the Stars' winner, wore a skimpy white outfit that covered her in just the right places and fingerless gloves. 50 Cent, who rocked a backwards baseball cap and a big necklace only stayed for a minute on the stage, enough to heat with Scherzinger.