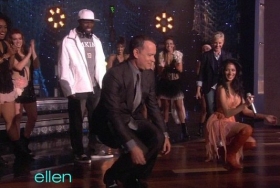 Fif joined Nicole once again for a live performance of their 'Right There' single, this time last night, May 24 on The Ellen DeGeneres Show. Afterwards, 50 Cent says that he is one song away from completing his LP. Nicole discussed her new role as host of the U.S. X Factor.

'It's good,' she said. 'We just started the audition process. Simon Cowell gets kind of out there. It's fun and spontaneous.'

After the interview the Oscar winning actor, Tom Hanks got his groove on alongside fellow guests 50 Cent, and Pussycat Doll Nicole Scherzinger for some moves.

As Ellen urged him to 'bring the funk', 'show me how to do it', Tom bent his knees and wiggled his hips around in front of his amused audience. We got to say his is a legend!

Here their performance on the show: