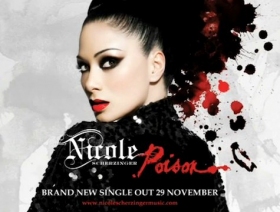 In this pulsating dance track produced by acclaimed music maker RedOne, the lead singer of The Pussycat Dolls dares the boys to "step into the danger zone" and kiss her while poison is still dripping from her lips.

Before this "Poison", Scherzinger debuted a solo song called "Nobody Can Change Me" on Ryan Seacrest's radio show in May this year. The self-empowering track, however, failed to chart and that is maybe the reason why she moved to another song.

Of her still-in-the-work album itself, Nicole Scherzinger said, "My music that I'm working on now for my album might have a little more rock, funk, soul edge, but it's basically in the genre of popular music and it's just honest music, fun music."