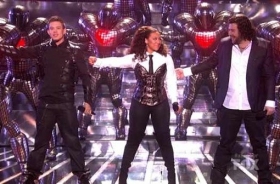 The only girl remained in competition, Melanie Amaro sang a great duet with R&B crooner R. Kelly "I Believe I Can Fly", and it was the first time for Kelly to perform it as a duet song. Melanie than offered Beyonce Knowles' "Listen" as second song.

Josh Krajcik took the stage with Alanis Morissette and sang her ballad-hit "Uninvited", and than he gave a rock n' roll cover of Etta James' soulful song "At Last".

Chris Rene was joined by punk princess Avril Lavigne and rocked on her single "Complicated" and didn't hesitate to give it some new verses. Rene also performed his orginal "Young Homie" as his second performance.

Melanie Amaro "I Believe I Can Fly" with R. Kelly :

The final trio made a special appearance with the robots from the Cirque du Soleil singing on Michael Jackson's "They Don't Care About Us". They were stomping, choreographed robots with dollar sings on their chests. With a $5 million prize and a Pepsi Super Bowl commercial on the line, the three finalists will find the winner on Thursday, December 22nd.