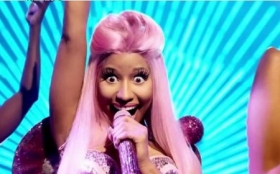 "Starships" songstress Nicki Minaj can now be seen in the latest commercial for Pepsi! The much-anticipated clip with Nicki performing the 'Moment 4 Life' as soundtrack is titled "Now in a Moment" and features lot of... freeze moments! A young couple, apparent Pepsi lovers is surprised in different cuts where people are all frozen: partying people on the beach, a tomato festival, a fashion show, and later Nicki Minaj's concert.

Minaj is only the first star to front PepsiCo’s new, pop culture-based campaign, as others will be joining as brand ambassadors in the near future.

"We are excited to be announcing a series of exclusive partnerships in the U.S. over the next few months that will breathe life into 'Live for Now' and offer one-of-a-kind experiences for our fans," stated PepsiCo chief marketing officer Simon Lowden, as Brand Channel reports. Check out Pepsi commercial in here.