Watch Nicki Minaj and Cassie in the new video The Boys 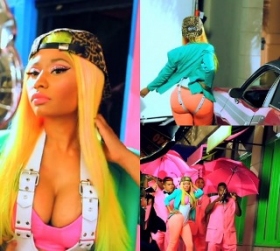 Nicki Minaj's new video "The Boys" featuring Cassie chock with their sexy attitudes emphasized by the bright colors. The pinky bubblegum video was directed by Colin Tilley and is the lead song from her re-release second studio album "Pink Friday Roman Reloaded: The Re-Up".

"The Boys" clip shows Minaj riding a small orange car that crashes on a building. On the other Cassie enters in a pink scene performing the single's hook, showing her sexy body in a white-piece, followed by other killing outfits. The video is explicit and their cool and glamorous clothes will be certainly a hit.

"The Boys" takes its origins in Cassie's originally song titled "Money on Love."